The LEF prize is awarded to companies and organisations that do meaningful business and make a difference on a daily basis for their environment, their customers, their suppliers, their own employees and their stakeholders/shareholders. Companies and organisations with distinctive character, with spirit, with a slightly different approach, with vision, with goals and a clear strategy to achieve them. In short, enterprising organisations with visible guts and a no-nonsense Rotterdam attitude.

Rotterdam is an enterprising region attracting a wide range of Entrepreneurial Organisations, varying from sole traders, retailers, small to large companies and multinationals. These organisations bring with them great determination to succeed and a passion to create value to the community around them. 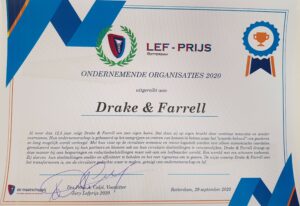